問1 Which of the following is closest to the meaning of the underlined word imperative in paragraph(1)?


問2 According to paragraph(2), which of the following statements is true?

① Early routes were created by people who traveled by wheeled carts.

② People’s first routes on land followed the growth of towns and cities.

③ The development of land routes led to progress in many areas of society.

④ The improvement of routes resulted in the invention of the automobile.


問3 Why is the example of Edo introduced in paragraph(3)?

① To describe the difficulty of creating routes on the water

② To emphasize the fact that it was an important city

④ To illustrate the important roles of water routes for cities


問4 What does paragraph(5) tell us about routes?

① Routes can be thought of as existing invisibly in the world.

② Routes that move information can be regarded as dangerous.

③ The fundamental functions of routes are declining.

④ The importance of different kinds of routes is the same.


問5 What is the main point of this article?

② Improvements in transportation have come at great cost.

③ Technology has interfered with opening up routes around the world.

④ The advancement of humanity was aided by the development of routes. 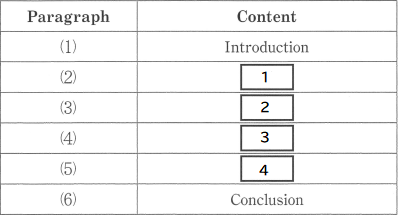 ① Creation of roads used by people, animals, and vehicles

② Developing ways for people to fly from place to place

④ Opening of lanes for ships to travel and transport things