問1 What is the total score achieved by the five throws in this figure? 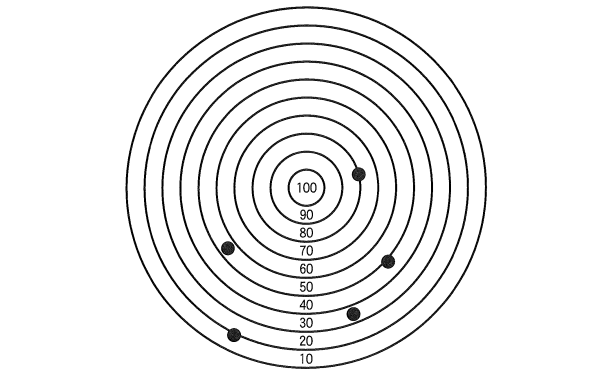 問2 Which of the following statements is true about the experiment?

① Eighty-one throws were made from the same initial throwing location in the Blocked group.

② The distance from the target remained unchanged during the entire experiment for the Combined group.

③ The set of throws from the same location involved various ways of throwing for the Combined group.

④ Throwing three or more times in a row from the same location was against the rules for the Random group.


問3 Which of the following statements is true about the results?

① The Blocked group had the best score both during practice and on the performance test.

② The Blocked group showed the worst score among the three groups on the performance test.

③ The Combined group showed lower accuracy than the Random group on the performance test.

④ The Random group had the lowest accuracy both during practice and on the performance test.


問4 What will most likely be discussed next in this report?